BEDFORD, Ind. (Oct. 27, 2021) — Local community leaders met the newest Consul-General of Japan and members of his staff at Radius Indiana’s “An Evening with Japan” event to renew the relationship between the Radius region and both the Consulate and the Japan External Trade Organization (JETRO) Chicago.

The event was Consul-General Tajima’s first official speaking engagement in Indiana since he was appointed to the position last month. It was designed for Radius stakeholders to learn more about the Indiana-Japan relationship as well as explore opportunities for collaboration.

“The Radius region, the state of Indiana, and Japan understand that one of the best ways to create more opportunities and prosperity for our people is to look outside our borders,” Skillman said. “The grand evening and enthusiastic information exchange should propel the partnership forward.”

During the event, Consul-General Tajima spoke about the current relationship between Japan and Indiana and the Japanese economy. Inforzato discussed the importance of building relationships with Japanese firms and thanked Radius for its continued efforts to strengthen its relationship with JETRO.

This was the first opportunity for many Radius members to hear directly from the Consul-General of Japan and JETRO, which are often on the front lines in facilitating new contacts with Japan for economic development opportunities.

“I am happy to see how close Radius and their community leaders have worked with and received Japanese companies operating in their region,” Consul-General Tajima said. “Our Consulate and I will continue to work with Radius and offer any support and assistance we can.”

Inforzato and members of the JETRO team also visited Linton and its mayor, John Wilkes, for lunch and a tour of the community. Wilkes began his relationship with JETRO in 2018. He has continued it over the last three years, traveling to both the JETRO Chicago office and Japan through the Japan Foundation “Grassroots Exchange Network-Japan (Gen-J)” in 2019.

The Radius visit concluded with a trip to meet with M&C Tech’s president Masato Adachi and a tour of the company’s facility in Washington, which was the first investment by a Japanese company in the Radius region. M&C Tech invested $4.6 million into a 40,000 square foot building, which opened in 2018. The company added 35 new jobs to the Radius region, with more to come.

“The leadership of Radius Indiana understands the deep value of and supports manufacturing investment from Japan,” Inforzato said. “Their leadership, particularly the mayors we met from southern Indiana, are truly focused on relationship building with JETRO to better understand how to approach and to make relationships with Japanese companies considering investment expansion in the midwest.”

LINTON, Ind. (June 28, 2021) — A shovel-ready site in Linton received certification from the state of Indiana through the Verisite certification process, becoming the first in Indiana to be both Verisite and state-certified.

Leaders from the Indiana Office of Community and Rural Affairs (OCRA), Radius Indiana, Verisite, the City of Linton, Greene County Economic Development Corporation and the Linton-Stockton Chamber of Commerce partnered to celebrate the certification of the site.

“By being designated as site certified, Linton has illustrated their commitment to economic growth,” said OCRA Executive Director Denny Spinner. “This shows that the Dunkerly site is ready for investment and has the resources needed to be successful. This is an exciting achievement for the community and I congratulate all community members and partners involved in making this designation happen.”

The event featured comments from Spinner, Jeff Quyle from Radius Indiana, Courtney Zaugg from Plaka and Associates/Verisite, and Mayor John Wilkes from the City of Linton.

The 60.97-acre site in Greene County completed the Verisite certification process and received a Silver Site certification in August 2020. The Silver Certification gives companies and site selectors the assurance the site is ready for expedited development and that all needed documentation and data has been compiled and verified, which results in cost savings and speed to market for a new business. Indiana Municipal Power Agency (IMPA) provided financial support and engagement in the certification process.

“When we say ‘You’ll like Linton’, it’s not just a slogan. We mean that sincerely, and we apply it equally to new residents and new businesses. Our community is prepared to treat newcomers with hospitality and warmth,” said Mayor Wilkes.

Site certification creates opportunities for cities and counties to become preferred locations for industrial growth and innovation. OCRA and Verisite each offer their own certification programs for sites that are ready for economic development.

The certification process assures site selectors and companies that the area is ready for development and provides documentation with all test results. Criteria to become certified include distance from a major highway, proper zoning, utility capacity and distance, and the number of continuous acres.

“Our Radius team appreciates all the cooperation that we experienced while working with everyone from OCRA staff to Verisite professionals to Linton City leaders,” said Quyle. “Their team-oriented attitude is exactly what a company wants to experience when they begin a business expansion effort in a community like Linton.” 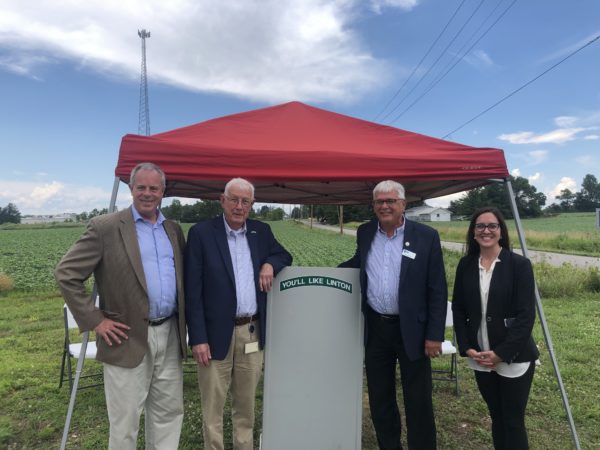